In Orissa most of the brāhmaṇas have the title Dāsa. Generally it is understood that the word dāsa refers to those other than the brāhmaṇas, but in Orissa the brāhmaṇas use the Dāsa title. This is confirmed by Culli Bhaṭṭa. Actually, everyone is dāsa because everyone is a servant of the Supreme Personality of Godhead. In that sense, the bona fide brāhmaṇa has first claim to the appellation dāsa. Therefore in this case the designation dāsa is not incompatible.

What is meaning of Prabhupāda or Viṣṇupāda?

Posted by Jagannatha Puri HKM on January 15, 2020 in Uncategorized

“Śrī CaitanyaMahāprabhu is the Supreme Personality of Godhead Himself, Śrī Kṛṣṇa, and all His servants address Him as Prabhupāda. This means that there are many prabhus taking shelter under His lotus feet.” The pure Vaiṣṇava is addressed as prabhu, and this address is an etiquette observed between Vaiṣṇavas. When many prabhus remain under the shelter of the lotus feet of another prabhu, the address Prabhupāda is given. Śrī NityānandaPrabhu and Śrī AdvaitaPrabhu are also addressed as Prabhupāda. Śrī CaitanyaMahāprabhu, Śrī AdvaitaPrabhu and Śrī NityānandaPrabhu are all viṣṇu–tattva, the Supreme Personality of Godhead, Lord Viṣṇu. Therefore all living entities are under Their lotus feet. Lord Viṣṇu is the eternal Lord of everyone, and the representative of Lord Viṣṇu is the Lord’s confidential servant. Such a person acts as the spiritual master for neophyte Vaiṣṇavas; therefore the spiritual master is as respectable as Śrī KṛṣṇaCaitanya or Lord Viṣṇu Himself. For this reason the spiritual master is addressed as Oṁ Viṣṇupāda or Prabhupāda. The ācārya, the spiritual master, is generally respected by others as Śrīpāda, and the initiated Vaiṣṇavas are addressed as Prabhu. Prabhu, Prabhupāda and Viṣṇupāda are described in revealed scriptures like Śrīmad-Bhāgavatam, Caitanya–caritāmṛta and Caitanya–bhāgavata. In this regard, these scriptures present evidence accepted by unalloyed devotees.The prākṛta-sahajiyās are not even worthy of being called Vaiṣṇavas. They think that only castegosvāmīs should be called Prabhupāda. Such ignorant sahajiyās call themselves vaiṣṇava–dāsa–anudāsa, which means the servant of the servant of the Vaiṣṇavas. However, they are opposed to addressing a pure Vaiṣṇava as Prabhupāda. In other words, they are envious of a bona fide spiritual master who is addressed as Prabhupāda, and they commit offenses by considering a bona fide spiritual master an ordinary human being or a member of a certain caste. Śrīla Bhaktisiddhānta Sarasvatī Ṭhākura describes such sahajiyās as most unfortunate. Because of their misconceptions, they fall into a hellish condition.

Secret of Success in Vedic Life

Posted by Jagannatha Puri HKM on January 15, 2020 in Uncategorized

This is the way to advance in spiritual science. One must accept the words of an ācārya, a bona fide spiritual master, to clear the path for spiritual advancement. This is the secret of success. However, one’s guide must be a spiritual master who is actually an unalloyed devotee strictly following the instructions of the previous ācārya without deviation. Whatever the spiritual master says must be accepted by the disciple. Only then is success certain. This is the Vedic system.
Sārvabhauma Bhaṭṭācārya was a brāhmaṇa and a realized soul, whereas Pratāparudra was a kṣatriya. Kṣatriya kings used to obey very faithfully the orders of learned brāhmaṇas and saintly persons, and in this way they would rule their country. Similarly, vaiśyas used to follow the king’s orders, and śūdras used to serve the three higher castes. In this way the brāhmaṇas, kṣatriyas, vaiśyas and śūdras used to live cooperatively, performing their respective duties. Consequently society was peaceful, and people were able to discharge the duties of Kṛṣṇa consciousness. Thus they were happy in this life and able to return home, back to Godhead.

Why do devotees travel to places of Pilgrimage?

A Vaiṣṇava travels to places of pilgrimage to purify them and reclaim fallen conditioned souls. This is one of the duties of a Vaiṣṇava. Actually, Śrī Caitanya Mahāprabhu is not a living entity but the Supreme Personality of Godhead Himself. Consequently, He is a fully independent controller, yet in His position as a devotee, He carries out the activities of a devotee.

Śrīla Bhaktisiddhānta Sarasvatī Ṭhākura points out that because there are many permanent residents in holy places who do not precisely follow the rules and regulations governing living in a sacred place, exalted devotees have to go to these places to reclaim such persons. This is the business of a Vaiṣṇava. A Vaiṣṇava is unhappy to see others materially enmeshed. Śrī Caitanya Mahāprabhu taught these activities of a Vaiṣṇava although He is the worshipable Deity of all Vaiṣṇavas, the complete and independent Supreme Personality of Godhead. He is pūrṇaḥ śuddho nitya-muktaḥ-complete, completely uncontaminated and eternally liberated. He is sanātana, for He has no beginning or end.

Can a Vishnu devotee visit other Devata's temple?

To set the example, Śrī Caitanya Mahāprabhu personally visited temples in various holy places. Wherever He visited, He immediately exhibited His ecstatic love for the Supreme Personality of Godhead. When a Vaiṣṇava visits the temple of a demigod, his vision of that demigod is different from the vision of the impersonalists and Māyāvādīs. The Brahma-saṁhitā supports this. A Vaiṣṇava’s visit to the temple of Lord Śiva, for example, is different from a nondevotee’s visit. The nondevotee considers the deity of Lord Śiva an imaginary form because he ultimately thinks that the Supreme Absolute Truth is void. However, a Vaiṣṇava sees Lord Śiva as being simultaneously one with and different from the Supreme Lord. In this regard, the example of milk and yogurt is given. Yogurt is actually nothing but milk, but at the same time it is not milk. It is simultaneously one with milk yet different from it. This is the philosophy of Śrī Caitanya Mahāprabhu, and it is confirmed by Lord Kṛṣṇa in the Bhagavad-gītā (9.4):

“By Me, in My unmanifested form, this entire universe is pervaded. All beings are in Me, but I am not in them.”
The Absolute Truth, God, is everything, but this does not mean that everything is God. For this reason Śrī Caitanya Mahāprabhu and His followers visited the temples of all the demigods, but they did not see them in the same way an impersonalist sees them. Everyone should follow in the footsteps of Śrī Caitanya Mahāprabhu and visit all temples. Sometimes mundane sahajiyās suppose that the gopīs visited the temple of Kātyāyanī in the same way mundane people visit the temple of Devī. However, the gopīs prayed to Kātyāyanī to grant them Kṛṣṇa as their husband, whereas mundaners visit the temple of Kātyāyanī to receive some material profit. That is the difference between a Vaiṣṇava’s visit and a nondevotee’s visit.
Not understanding the process of disciplic succession, so-called logicians put forward the theory of panchopāsanā, in which a person worships one of five deities-namely Viṣṇu, Śiva, Durgā, the sun-god or Ganeśa. In this conception the impersonalists accept one of these five deities as supreme and reject the others. Such philosophical speculation, which is certainly idol worship, is not accepted by Śrī Caitanya Mahāprabhu or by Vaiṣṇavas. This imaginary deity worship has recently been transformed into Māyāvāda impersonalism. For want of Kṛṣṇa consciousness, people are victimized by the Māyāvāda philosophy, and consequently they sometimes become staunch atheists. However, Śrī Caitanya Mahāprabhu established the process of self-realization by His own personal behavior. As stated in Caitanya-caritāmṛta (Madhya 8.274):

“A Vaiṣṇava never sees the material form of anything, moving or nonmoving. Rather, everywhere he looks he sees the energy of the Supreme Personality of Godhead, and immediately he remembers the transcendental form of the Lord.”

The Story of Dhanush Tirtha

Lord Chaitanya Mahaprabhu arrived at Dhanus-tīrtha, where He took His bath in the river Nirvindhyā. He then arrived at Ṛṣyamūka Mountain and then went to the forest called Daṇḍakāraṇya.
According to some opinions, Ṛṣyamūka is a chain of mountains beginning at the village of Hāmpi-grāma in the district of Bellary. The mountain chain begins along the bank of the river Tuṅgabhadrā, which gradually reaches the state of Hyderabad. According to other opinions, this hill is situated in Madhya Pradesh and bears the present name of Rāmpa. Daṇḍakāraṇya is a spacious tract of land which begins north of Khāndeśa and extends south to Ahmadnagar, west to Nāsika, and east to Aurangabad. The Godāvarī River flows through this tract of land, and there is a great forest there where Lord Rāmacandra lived.

Within that forest Śrī Caitanya Mahāprabhu then visited a place called Saptatāla. The seven palm trees there were very old, very bulky and very high.
The name Saptatāla is mentioned in the Kiṣkindhyā Chapter of the Rāmāyaṇa and is described in the eleventh and twelfth sections of this chapter.

After seeing the seven palm trees, Śrī Caitanya Mahāprabhu embraced them. As a result, they all returned to Vaikuṇṭhaloka, the spiritual world.

After the seven palm trees had departed for Vaikuṇṭha, everyone was astonished to see them gone. The people then began to say, “This sannyāsī called Śrī Caitanya Mahāprabhu must be an incarnation of Lord Rāmacandra.

“Only Lord Rāmacandra has the power to send seven palm trees to the spiritual Vaikuṇṭha planets.”

Eventually Śrī Caitanya Mahāprabhu arrived at a lake known as Pampā, where He took His bath. He then went to a place called Pañcavaṭī, where He rested.
According to some, the old name of the Tuṅgabhadrā River was Pambā. According to others, Vijaya-nagara, the capital of the state, was known as Pampātīrtha. Yet according to others, the lake near Anāguṇḍi, in the direction of Hyderabad, is Pampā-sarovara. The river Tuṅgabhadrā also flows through there. There are many different opinions about the lake called Pampā-sarovara. 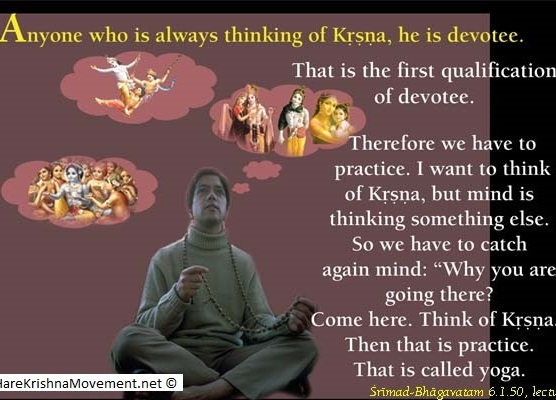 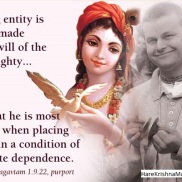 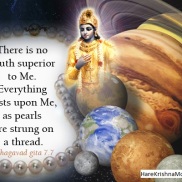